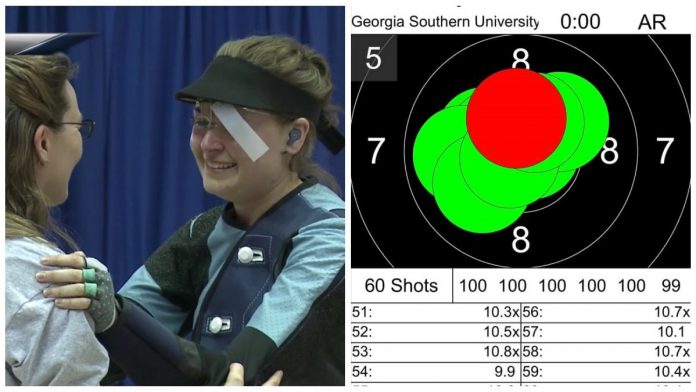 Rosemary Kramer of Georgia Southern University scored a 599/600 in prelims at the NCAA Air Rifle Championships on Saturday. (Photos: Screenshots)

“I’m obviously proud of Rosemary’s performance today, but I”m even more proud of the work she did getting here,” Georgia Southern head coach Sandra Worman said. “She came in with the intention of setting the NCAA record, and everything she did and thought about coming into this match was purposefully made to meet that goal.”

Once moving to the finals, Kramer faced stiff competition and finished behind two athletes from Texas Christian University, picking up the Bronze with a 226.2. First place went to TCU’s Kristen Hemphill with a 248.2 while Angeline Henry brought down the silver with a 247.9 showing. Of note, Ginny Thrasher, who won a gold medal in the women’s 10-meter air rifle at the 2016 Summer Olympics in Rio, came in 11th place overall.

What a prelim session for Rosemary Kramer, who shoots an NCAA Air Rifle Championship record 599 (out of 600)! She moves on to the finals here in an hour. pic.twitter.com/KYzfJPFMvp

In other news from the event, TCU took home the 2019 overall National Championship with a final score of 4,699 as well as bragging rights as the top smallbore team. Second place overall went to West Virginia, followed by Air Force, Murray State, and Kentucky in the top five. Air Force’s air rifle team won the overall team championship in their discipline. Elizabeth Marsh of TCU won the smallbore individual championship. Full standings are here.

As for Kramer, a senior who was on a prep school team that won the Navy JROTC National Championship in 2014, Georgia Southern says she is now “prepping for a run at the 2020 Olympics.” The school says Kramer holds 11 of the top 12 all-time highest air rifle scores in Georgia Southern’s program history and her 581.140 average is a school record.

Kramer talks about the sport on the eve of the National Championships, below.