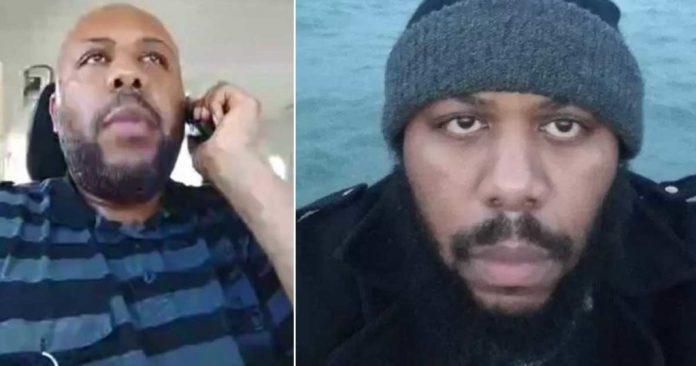 The Midwest of the U.S. is collecting itself again as the body of Steve Stephens rests on a cold morgue slab. Stephens ended his own life after local LEOs caught up to him, after some steel nerved fast food employees delayed him, ending the manhunt.

Stephens is a stark lesson in awareness, preparedness, and reality. For these reasons this post will remain active. For the Family of Robert Godwin, they can begin to know peace once more… a spokeswoman for the family, his daughter I believe, publicly forgave Stephens.

We know that we DO NOT know all the machinations, motivations, and decisions that lead Stephens to publicly broadcast his murder of Robert. He then ventilated the only head that contained all those answers, he may not even have understood them all himself… emotion can be at odds with logic. Because of that we can run circles around this case ad infinitum and never have anything much beyond the physical evidence.

The physical evidence is more telling and we can take more from it.

To expand on these points

-The entire video was 57 seconds. The actual homicide was a fraction of the video. The attack was fast, violent, overwhelming, and surprising. Brutal and lethal efficiency that a victim must get ahead of to survive it.

-Robert Godwin was not involved in the situation between Stephens and Lane at all. Robert was chosen as a method of punishment towards Lane, his death was supposed to be somehow on her hands as a means of retribution. This fact did not make the attack less lethal.

-The short distance between Robert Godwin and Stephens made any possible reaction Robert had between Stephens drawing the gun and firing a very short time. Anyone in that situation regardless of physical capability needs to react immediately.

-When Stephens drew down on Robert, Robert did act. He raised his bag in front of him to shield himself… and it did not prevent his death. Robert’s actions were instinctual but not decisive. In a situation with extreme close quarters involving a firearm your strongest option is usually close the gap, grab the gun (or wrist), and hurt the attacker… hurt them badly. Match their level of violence, overwhelm it, and regain control… That’s your strongest option but it does not guarantee you’ll save your life, it simply betters your odds. In this case we had Stephens, a large man in his 30’s, against Robert, a smaller man in his 70’s, where Stephens intention was to kill Robert on live broadcast. Stephens held every advantage. It is unlikely, even armed, that Robert would have survived. We can only speculate about the effectiveness of knocking the phone away, running, Robert striking Stephens, or any theoretical alternative.

So the take away… How would you maximize your survivabilty? Because there will always be a Steve Stephens, rare individuals who choose to be wastes of flesh, oxygen thieving, plagues on their fellow man.

During times after tragedy countless hours will be spent trying to analyze why these weak willed feeble minded people decided to throw all value they held aside in a tantrum. Their lives will be torn apart to try and “understand” so “it doesn’t have to happen again”… except it will. Because it never HAD to happen in the first place, someone chose to make it happen. There will always be “one”.

The take away is if you end of in the path of “one” Be the HARDEST FUCKING PERSON THEY’VE EVER TRIED TO KILL! Make them pay dearly for your life because it is yours to give not theirs to take.

I apologize for any errors in the original posting below, I will not be be correcting them. The current information on the case can be very widely sourced from news venues. Additionally if you are triggered by Steve Stephens picture being in this article update I do not subscribe to the theory of “don’t say their names” “He whom shall not be named” for dealing with killers. If that causes you mental anguish and my description of him and those akin to him as weak willed, feeble minded, waste of flesh, oxygen thieving plagues on their fellow man wasn’t recompense enough I can’t help you.

If you haven’t heard, while the rest of the nation was celebrating spring and the Easter holiday one man Steve Stephens of Cleveland Ohio, shot and killed 74 year old Robert Godwin on live streaming video. Warning: link shows Mr. Godwin’s death

Stephens parked his vehicle and shot Godwin calmly in 57 seconds before blaming the cold blooded homicide on one Joy Lane (his girlfriend?). Another set of videos shows him speaking to friends on the phone while placing blame for the killings (claiming 13 kills) on Joy Lane, his mother, and friends.

Stephens is still free, armed, and dangerous. The last phone ping was in Pennsylvania so residents and readers there should be aware.

If you can carry. Carry.

I point this out and share the videos because of the raw reality and awareness. There is no safe space, no buffer when it comes to violence justified by raw emotion. It does not need to make sense to you and I, only the person or persons pulling the triggers.

What we need to do is be able to react. Mr. Godwin, a man who had survived through some of the most volatile times in U.S. History for civil rights, was gunned down by a 33 year old throwing a temper tantrum. If you or I find ourselves in a similar situation (perhaps the same situation today for Pennsylvania) how are we going to react, protect ourselves, and help Law Enforcement stop Stephens and any future threats.

Heads up and eyes open, especially in Pennsylvania. Around the country this is the most dangerous time for copycats to appear.