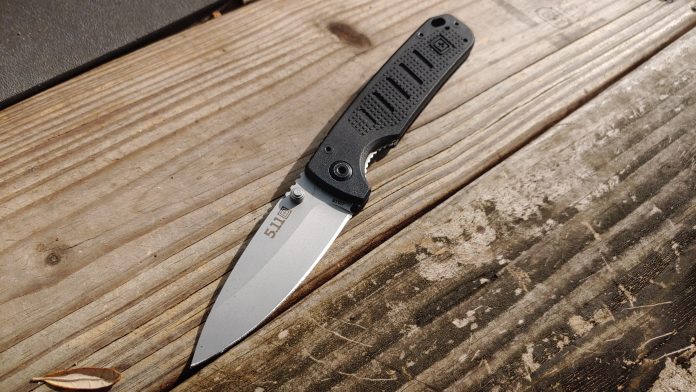 Sometimes you want a simple, affordable pocket knife that does the basics right. I love fancy knives, and I have knives that I think are absolutely fantastic. I also tend to be less likely to carry expensive knives and stick to what’s simple. The new Icarus DP Mini from 5.11 Tactical checks the box for a simple, effective, affordable pocket knife.

The Icarus DP Mini is the knife I found when searching for an excellent little knife for my son. He’s of age and can be trusted. I wanted to get him a good knife, but not an overly expensive one. He tends to lose things, so he’s not getting an Emerson or Spyderco just yet. At 32 dollars, the Icarus DP Mini won’t send me into much debt.

The Icarus DP Mini is a simple pocket knife with a name longer than its blade. The little 2.8-inch blade features a simple drop point tip and a fairly simple design. When opened, the knife is 7 inches total, and when folded, it’s 4-inches overall.

The blade is made from 8CR13MOV, which is admittedly a cheaper steel made in China. The equivalent most would know is AUS8. This steel is perfectly useable for a folding pocket knife as long as it’s heat-treated properly, and that doesn’t seem to be an issue here. For a first pocket knife, it’s a great choice. 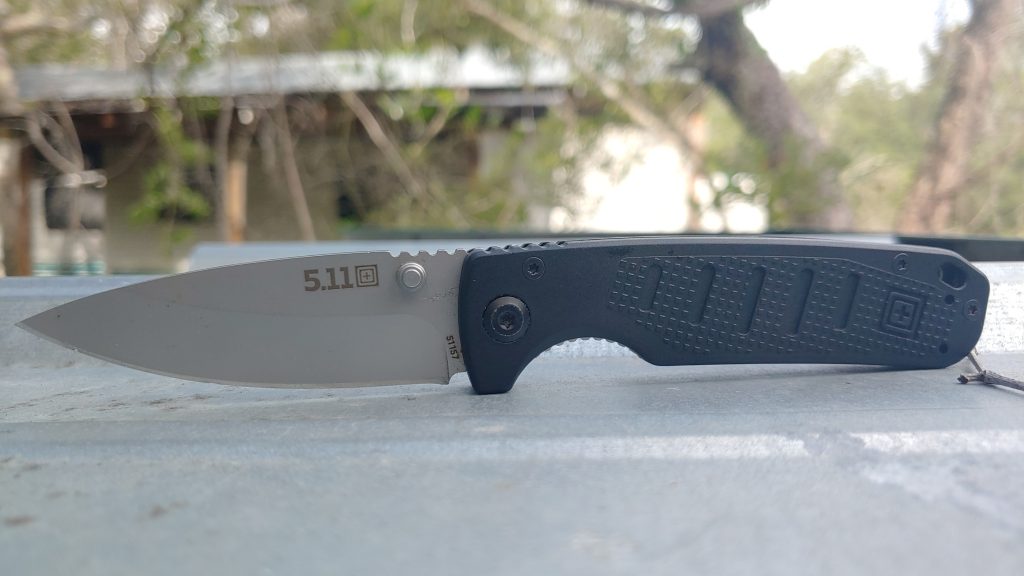 It’s easy to sharpen, resist corrosion pretty well, and get’s quite sharp. A dull knife is a dangerous knife. For a new user, they’ll get plenty of practice sharpening a knife.

The Icarus DP Mini utilizes a simple, ambidextrous thumb stud for opening and a liner locking system to keep the blade in place. Ambidexterity is the name of the game here, with a removable and reversible pocket clip. While it can jump from side to side, the knife always carries tip-up. The pocket clip is made from metal and is quite short but efficient. 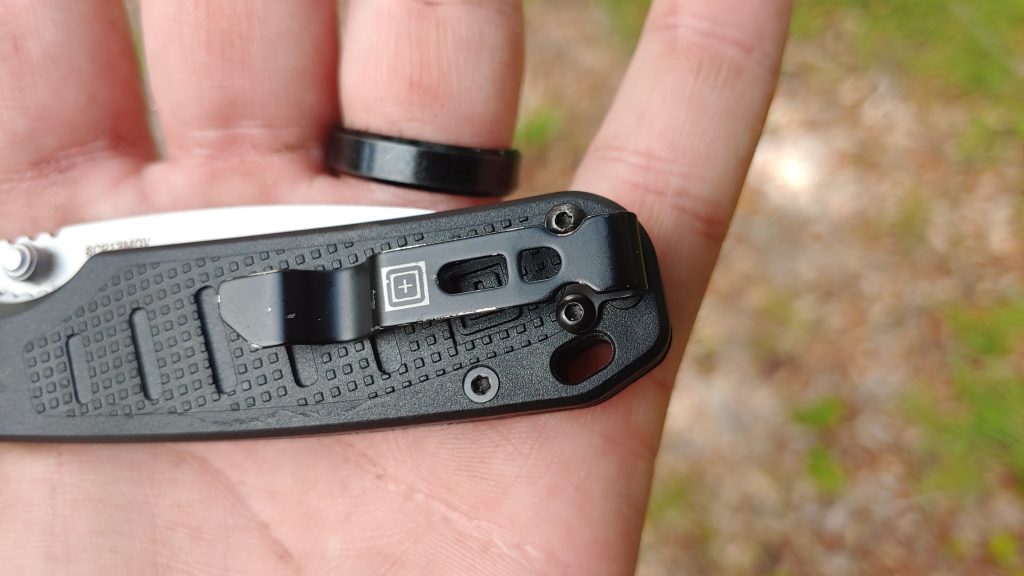 The Icarus DP Mini comes with a polymer grip. Specifically, fiberglass reinforced nylon. This keeps the knife fairly lightweight, and the whole setup is nice and thin for easy carry. At only 2 ounces, it disappears in your pocket.

The Icarus DP Mini in Action

The little Icarus DP Mini opens in a flash with a press of the thumb stud and a wrist flick. It’s not like a Kershaw or Emerson with speed, but who’s racing? The slow but smooth opening design is rather nice. Popping the blade out with a single hand isn’t difficult, and you can keep one hand busy while popping the blade out.

From 5.11 Tactical, the blade is ultra-sharp and has a nice touch. I hate a dull knife, and 5.11 ensures I don’t have one. The grind has a brilliant edge, and the grind is smooth and even. This makes the cutting action smooth and easily slices through your basic EDC tasks. The drop point isn’t fancy but great for all-around work. 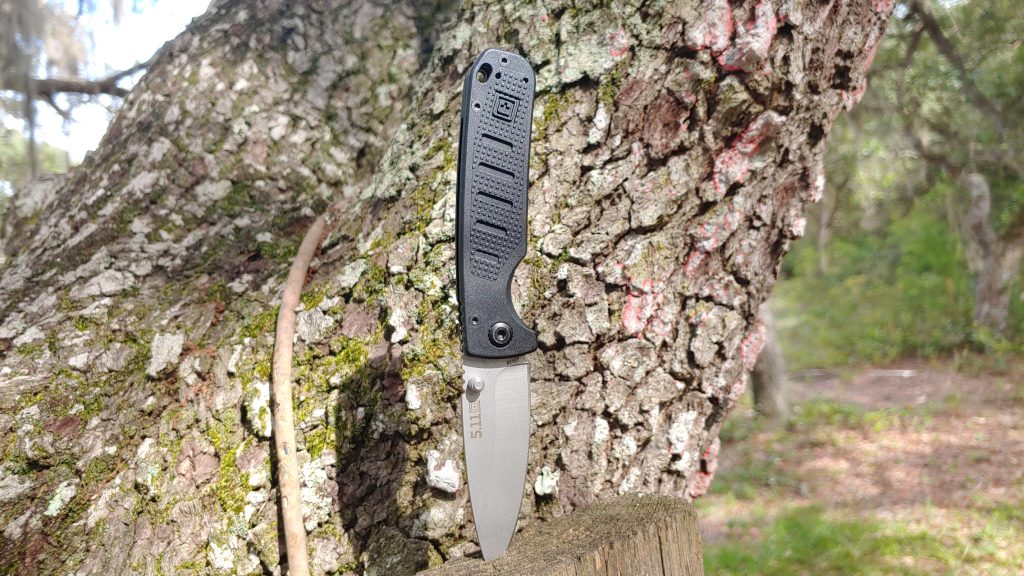 I have big hands, hands you describe as mitts, and the grip perfectly fits my hand for a little knife. A slight hump accommodates your trigger finger, and a series of serrations, aka the jimping, at the back of the handle and blade, give your thumb a purchase for leverage and control. 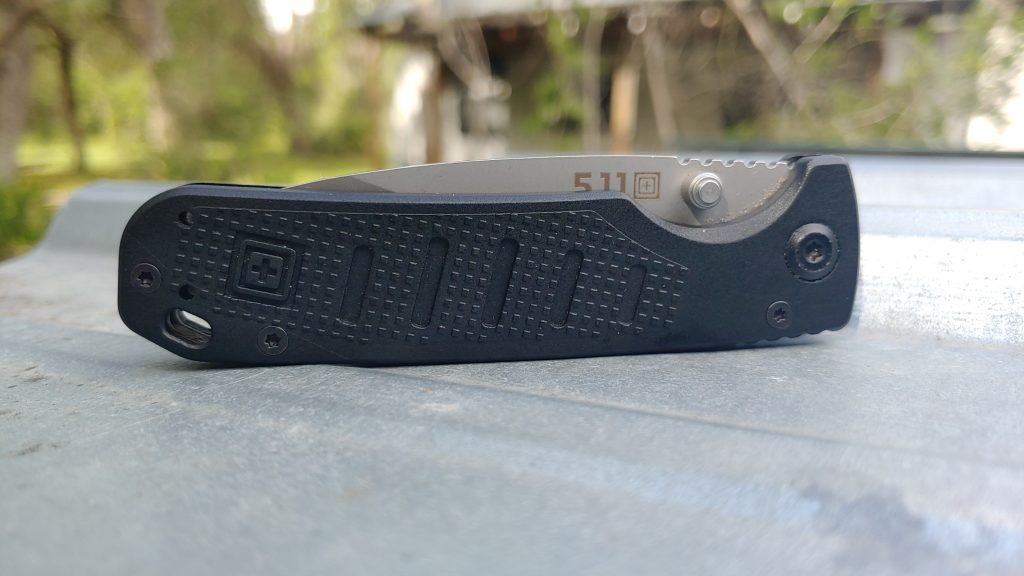 It slices, dices, and does so comfortably. The grip is heavily textured and doesn’t slip in your grip while you work. It doesn’t create hot spots, but that’s also for typical EDC tasks. If you start doing heavy-duty work, you’ll feel the burn a bit. That’s what happens when you put an EDC knife to survival tasks or general heavy work.

The little Icarus DP Mini is a heckuva knife for the price point. I’ve used it for a few weeks for various tasks, including cutting open bags of concrete, slicing thick plastic bands on stacks of lumber, opening boxes, and more. It’s dug in, done the work, and I’ve been more than satisfied with it.

Now it’s going into the pockets of my son for summer adventures, and I’ll let you guys know after summer break is over how well it can hold up! You can check it out here and tell them we sent you.