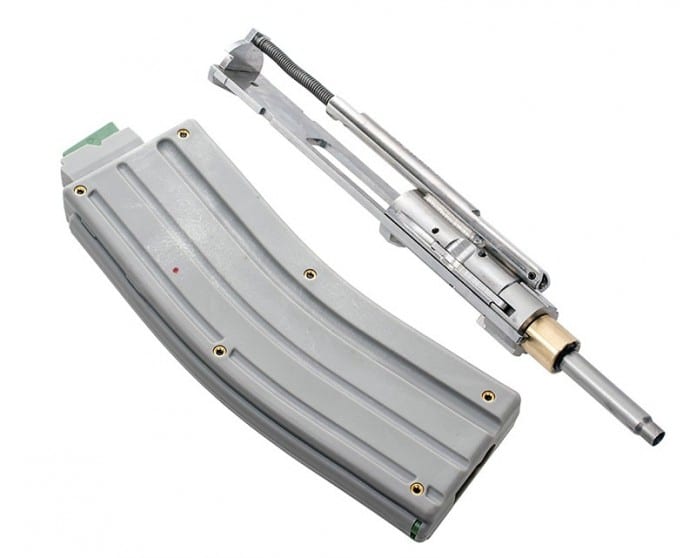 Another option for those looking for a tactical .22 is to convert an existing centerfire gun to a rimfire one. This route has the advantage of being a little cheaper and allowing the shooter to use his or her regular gun, particularly valuable when the rimfire shooting is being used as training for full-size trigger time. A disadvantage can be that .22LR in a gun designed for heavier cartridges does not have the benefit of a specially designed and tuned rimfire platform. Though conversion kits aim to keep things as reliable as possible, if the fit isn’t quite right or substandard ammo is used, the results can sometimes be a little disappointing. However, as the popularity of these kits has grown, so has the attention to detail and the overall reliability.

AR-15 modularity is one of the platform’s big draws. Changing calibers can be as easy as pulling two pins and swapping out upper receivers, and it should be no surprise that uppers chambered for .22LR are available. DPMS offers dedicated tactical .22 rifles, but they also make the .22LR upper receivers available separately. The DPMS AP4-style upper is forged Mil-Spec 7075 T6 aluminum and fits onto virtually any standard small-frame lower receiver. It has a 16-inch chrome-moly steel threaded barrel with an A2 flash hider. It comes with standard DPMS Glacier Guards, but in true AR fashion, these can easily be swapped out for other hand guards or rails. Also available is the DPMS Bull Barrel .22LR upper, with a heavy 16-inch chrome-moly steel barrel and standard-sized carbine-length free-float tube. Both DPMS tactical .22 uppers ship with one 10-round magazine.

Another option, even less expensive than swapping out uppers, is a drop-in rimfire conversion kit. The ARC .22 Conversion Kits from CMMG simply drops into the gun in place of the standard bolt carrier group. It has a forward section that mimics the .223/5.56 case and its own spring for the kit’s blowback action. The conversion kits come with compatible magazines.

Though some reviews and word of mouth on conversion kits such as this are less than stellar, a few things should be kept in mind. First, the ammunition selection can make a huge difference. Substandard ammo might struggle to operate conversions reliably, but that’s not any different than dedicated guns. Secondly, not all Mil-Spec guns are truly Mil-Spec, and guns that are at the edge or outside the standard might not work as well with conversion kits as the shooter expects. Finally, the gun’s barrel, particularly the twist rate, can have a huge effect on the accuracy of .22LR. Standard AR barrels are, of course, designed for .223/5.56 bullets propelled by a full charge, and .22LR will not behave exactly the same out of all barrels no matter how well the kit fits or how good the ammo is.

Finally, tactical .22 rimfire conversion kits for handguns are also available. This allows the shooter to get in plenty of practice with a carry gun, for instance, without breaking the bank when buying ammo. The SIG P938 .22LR Conversion Kit from Sig Sauer is a great example of one of these kits. It installs easily by field stripping the pistol and installing the kit when reassembling and using the included magazine. Similar kits are offered by many manufacturers for their guns and make a solid investment for training and for fun.