The smaller upgrades like optics and M-LOK are all good steps but let me address the big shift that the LWMMG and ISCR represent.

For the first time since the United States and NATO standardized the 5.56 and 7.62 rounds the military is looking to drastically increase the base mechanical capabilities of our weapon systems. One of the reasons the XM8 failed and the reason the M4 and M16 have served so long is that their was no significant gain in picking another 5.56 system. Look at SOCOMs SCAR program. They funneled all the money allotted to the SCAR procurement process into the Mk17 because that rifle offered a notable capability increase over M4 and MK18 5.56s, the MK16 as another 5.56 did not.

First let’s discuss the LWMMG. The chart above from Soldier Systems does an excellent job crunching the numbers on why the .338 NM Machine Gun would be so valuable.

When looking at side by side capabilities the M240NM (The General Dynamics MMG) has a 70-100% increase in effective range over the legacy M240B, going from 1000 meters to 1700-2000 meters (1.24 miles) The medium/general purpose machine gun just got a power boost that makes its range match the heavy M2A1 .50 caliber system. You have all of the range for 1/3 the weight and 1/3 the personnel over the M2A1. The heavy machine guns can now be allocated to emplacements and vehicles without short changing foot mobile infantry a long range effective machine gun support solution.

The parallel development of polymer ammunition casing will further reduce the weight of the system allowing more ammunition to be carried and increasing the effective time machineguns can be employed for sustained fire.

As the system stands, if it were fielded today, the 3 member machinegun team would double their effective range carrying a 4lb lighter weapon, tripod, and 500 rounds for a total weight increase of 1.7 lbs.

Doubling or better combat effective numbers for a weight gain (that will be negated in future systems) of 1%.

The term used is Overmatch. We want our deployed weapon systems to be more lethal at greater distances, lighter and more portable with a greater supply of ammunition, and usable both suppressed and unsuppressed day and night to be able to quickly gain fire superiority and dominance over any other fielded systems we may come into conflict with. Our troops can move faster, shoot further, and control more battle space. 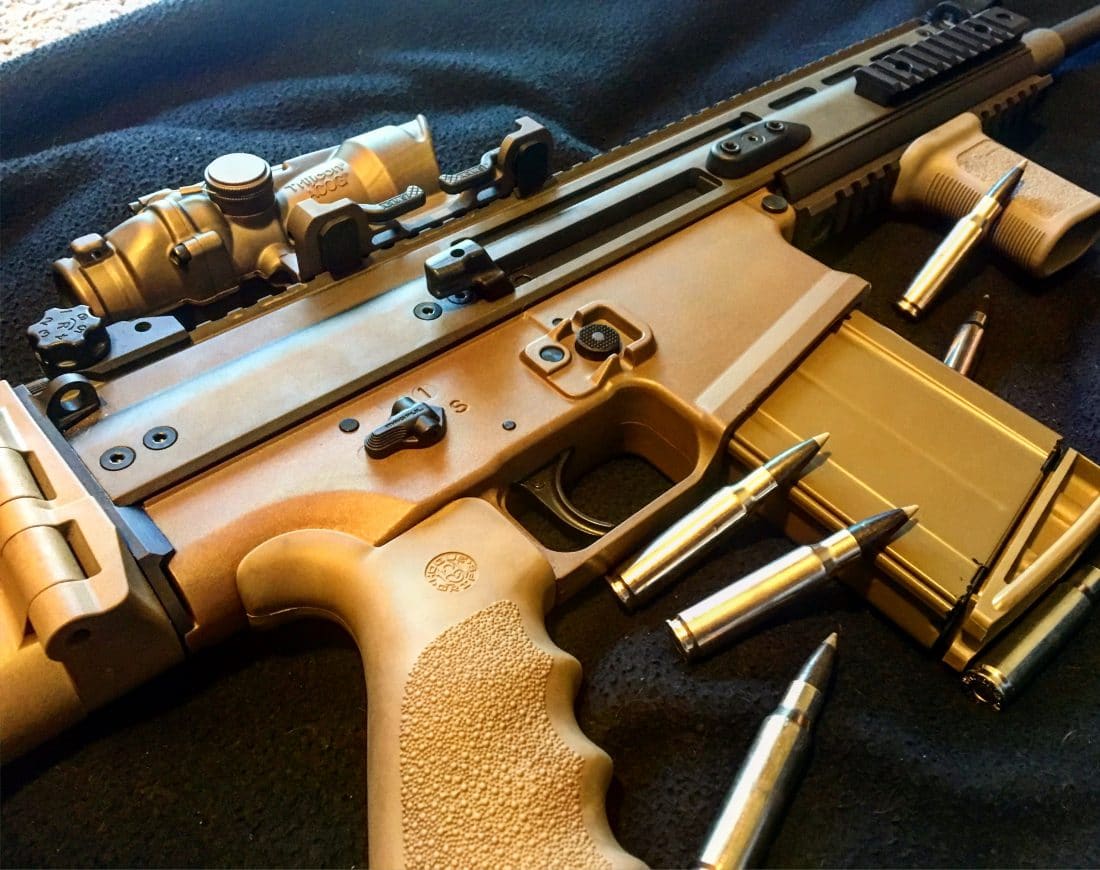 The Military has been flirting with a new service rifle since the turn of the millennium but as I commented earlier nothing that has been tested has been fielded in mass because the offered incremental improvements did not outweigh the costs of putting a new 5.56 rifle in the field to replace an already good 5.56 rifle.

The IBR/ISCR concept is, for now, just a concept but the end goal is numerically similar to the gains expressed by LWMMG over the current GPMG/MMG.

The first and quickly fieldable phase of the IBR would look at systems like the MK17 and M110A1 CSASS rekitted for use as a standard infantry rifle instead of sniper or designated marksman rifle roles. These 7.62 systems would give an immediate range and firepower boost to the individual soldier over 5.56 systems but at the cost of ammunition capacity and greater weight. This would close the gap and provide an overmatch capability against enemy combatants using outdated but long range rifles like the Mosin Nagant. The highest speed rifle with the quickest reflex optic still doesn’t do much when the guy throwing lead at you with iron sights can throw it 200 meter beyond your effective range. Phase 1 corrects that.

The second phase would be in the fielding of a new intermediate service rifle that would lighten the ammunition from 7.62, lower the recoil, increase the ballistics and precision, and extend the effective range. Calibers being studied include the popular .260 Remington and 6.5 Creedmoor both of which are ballistically superior to 7.62x51mm.

The Military and private research contractors continue to move us forward toward the next shift in small arms standards. We’ll keep our eye on things as we head toward 2020.

SCARs in 6.5 Creedmoor anyone?