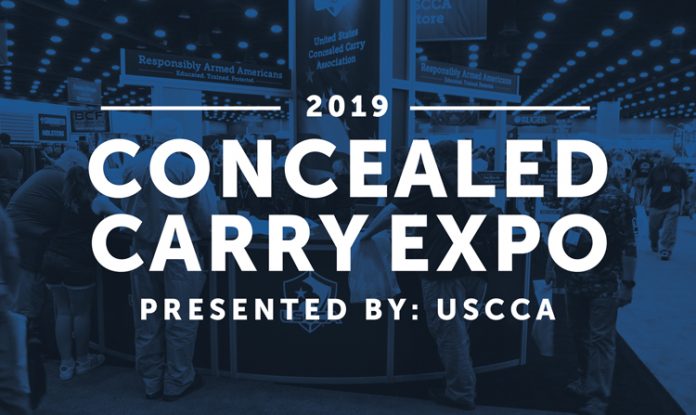 I drove down to the 5th annual United States Concealed Carry Expo which took place over the past weekend (May 17-19) in Pittsburgh.

We routinely attend and speak at the Gun Rights Policy Conference each September, someone gets to the NRA Annual Meeting in April, and we’ve seen a member visit and review the National Shooting Sports Federation’s SHOT Show the past two Januaries in Las Vegas. This was the first DRGO visit to this relatively new event.

NRA and SHOT Show can be overwhelming, both in merchandise on display and in the number of attendees. GRPC is very different, with hundreds of the most motivated gun rights advocates speaking and listening to each other, but little stuff to gawk at.

The USCCA Expo is a perfect mix of these. It’s solely focused on all things concealed: weapons (certainly), ammo, clothing for women (and men), tools, training, techniques and advocates. Concealed carry is USCCA’s sole mission—the organization takes it very seriously, and knows and shares everything about it. It has published Concealed Carry Magazine since it was founded in 2003 by Tim Schmidt, who is its President still. It introduced its Legal Protection plans in 2012. (Don’t call it insurance—USCCA had to pull out of New York and Washington on the heels of the NRA Carry Guard problems). I’ve been an enthusiastic member since 2009.

Our parent organization, the Second Amendment Foundation was there, with Mark Walters (Armed American Radio, sponsored by USCCA) and Andy Hooser (WQAM Radio’s “Voice of Reason” in Kansas) manning the booth. Dr. John Lott of the Crime Prevention Research Center joined them with books for sale and shared his encyclopedic knowledge of all good things firearm related. That was DRGO’s base.

Good time was also spent with Mike Piwowarski, host of Arms Room Radio; we had an interesting chat that will come up on the podcast shortly. And to this first-time visitor, Pittsburgh was an attractive, action-packed city that our family will visit sooner than later. So action-packed that a Garth Brooks concert downtown drew 75,000 people along with some college graduations, which made it almost impossible to get lodging nearby.

Pennsylvania had long been firearms friendly, but since 2015 the state government has been led by unfriendly Democrats, who limited reciprocity to 27 state’s resident-only permits. However, rural counties in western Pennsylvania want outdoor tourism and some make it quick and easy to pick up a Pennsylvania non-resident permit, which I did on the way down from New York State. The Expo, the David L. Lawrence Convention Center and Pittsburgh in general were quite congenial for carrying, with nary a “No Guns” sign to be found.

There were, as advertised, hundreds of exhibits with products beyond count, a variety of shooting activities (including live-fire tryouts of many handguns), and continuous seminars (most free, some at a fee) running all afternoon Friday, and all day Saturday and Sunday. Everything was discounted from website prices, which I’ll quote here. Here are some of the things that caught my fancy:

In the training department, dry-fire practice at home can be made more realistic. DryFireMag is “The Trigger Reset Magazine”, which goes for $90 to $110, depending on the model. It’s a magazine shaped device with a spring at the top that resets the trigger with each pull, so racking the slide isn’t necessary between pulls. Each  feels and sounds normal, while not even using the firing pin, which permits unlimited repetitions. It is so far available for most striker-fired Glocks, Smith & Wesson M&Ps, and Springfield XDs. It does not work with laser inserts that operate with the firing pin. It also will not drop out to mimic tactical reloading but must be pulled. My only complaint is that mine sticks well out of my Glock 26, so doesn’t feel identical in the hand. However, the company is developing models for more and more firearms, and you can request yours go in their queue.

Speaking of laser training, there is a new device in town, “Recoil Laser Training” by Laser Ammo. This does it nearly all. It comes as various models of handgun simulacra, that feel and weigh about what yours does. Like the DryFireMag, it allows repeated dry fire with a realistic trigger feel and (louder) sound, as well as a degree of recoil. It comes with laser targets that light up when tagged. It doesn’t have the full sound or kick of a real pistol, but it is as close as you’d want when dry firing indoors. A set costs from $250 to $400 depending on the model and accessories chosen, so I denied myself that.

The BodyGuard Belt is a new, improved classic belly band, costing $59, in black or beige (the website says “white”). I grabbed one of each. This is made of neoprene, so feels comfortable (though a bit sweaty). It’s special in that it can hold a handgun vertically or horizontally (or at an angle), with extra magazines on either side. So you can carry in any waist position, under an arm, or in between. A bonus zipper pocket can be positioned front or back, depending on the carry spot. You’ll want something between your skin and the part of the handgun projecting above the waist.

Another purchase for me was the NexBelt. This is a stiff gun belt with a leather (or nylon) exterior and synthetic interior. The trick is the way it buckles. The interior has a strip of ratchet-like cogs toward the end which NexBelt’s buckle grabs. This makes the belt continuously adjustable, a real advantage with different layers and holster options. There were just a few when I looked, but I was impressed enough to buy one. Later I found literally scores of belts and buckles on the website and ordered just a buckle I preferred. The buckle end of the belt can be cut to fit your range of sizes, and is held very tightly by a clamp and 2 set screws.

I’d seen the ArachniGrip Slide Spider advertised in the USCCA magazine. I hesitated because I thought it was a sticky applique adding grip to the slide. I was glad to see it in person because it’s actually an abrasive (like coarse emery paper) which means it won’t stick in a holster and interfere with the draw. It is custom fit to just about any manufacturer’s pistol slides. It works, for just $20 a pair, with a cool red spider logo or in plain black.

An item falling into the “Why didn’t I think of that?” category were “Handgun Holster Mounts” from PUG Protective Gear. These are simple mounts belt-width that can be screwed in anywhere and accept the belt clip of holsters. They come with or without simple neoprene holsters, but the clip is the thing. Any standard belt clip holster (for a firearm, cell phone, whatever) will grab it just like a belt. Voilá—your pistol goes anywhere you like, never out of its own holster, no fancy grips or containers required. The clips alone go for $7, $12 for two. It’s a no-brainer.

Mike and I made sure to stop by Wilderness Tactical Products to say “Hi”. These folks have offered first aid and survival kits for some time that we’ve found well thought out. Turns out they’ll still sell red pouches of various sizes, but the demand for stocked expert kits (we’re talking clotting gauze and bandages, chest seals, tourniquets, etc.) isn’t high because docs and EMTs like to choose their own supplies. (Mine live in a pocket of my sling bag/laptop bag along with my exam tools. Dr. Edeen wraps his trauma kit around an ankle.)

There were new magazine loaders, neat knives and, of course, every conceivable hand-holdable firearm, from Ideal Conceal’s 2-shot .380 Cell Phone Pistol to Ruger’s Super Redhawk 5502 .44 Magnum single-action revolver. KelTec has ended production of its iconic P11 10-round 9mm pistol, but says something new is coming soon. Clothing designed for concealed carry abounded, with plenty of purses, packs and other creative ways to conceal firearms anywhere.

Seminar presenters included highly-regarded names like Rob Pincus, and of course Tim Schmidt, Kevin Michalowski and Beth Alcazar of USCCA. There were handgun, ammunition, and accessory giveaways all over. 5.11 gave out evocative caps depicting the number 93 superimposed on a red pentagon superimposed on silver Two Towers.

This was an event that could keep a body busy all 3 days without setting foot outside the convention center. Yet it was still small enough that with a bit of planning all the exhibits could be perused in one afternoon. Learning fundamentals of self-defense, live shooting with a variety of weapons, admiring the latest and greatest, and picking up a few bargains all went on together.

Check out the 6th annual USCCA Expo in Kansas City, Missouri, March 20-22, 2020. It will be another great weekend!