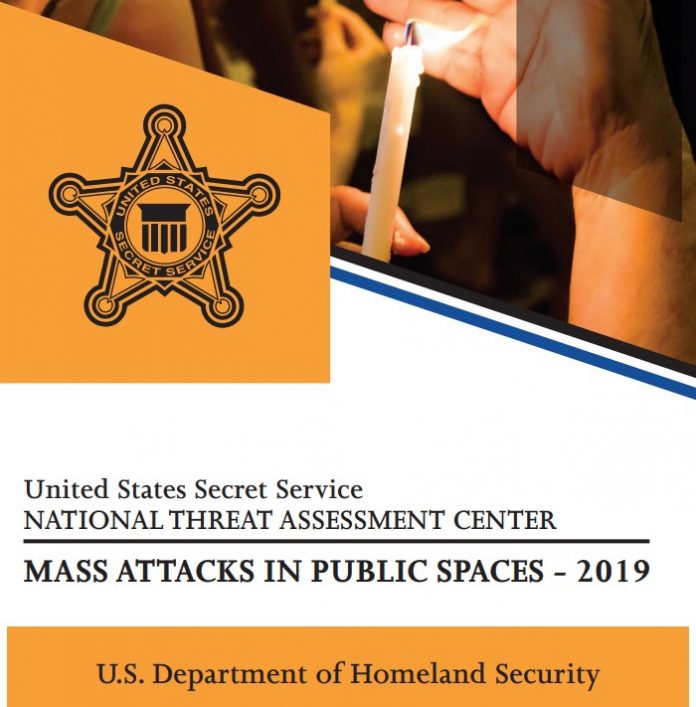 This publication is in the public domain. Authorization to copy and distribute this publication in whole or in part is granted. However, the U.S. Secret Service star insignia may not be otherwise reproduced or used in any other manner without advance written permission from the agency. While permission to reprint this publication is not necessary, when quoting, paraphrasing, or otherwise referring to this report, the citation should be: National Threat Assessment Center. (2020). Mass Attacks in Public Spaces – 2019. U.S. Secret Service, Department of Homeland Security. <-Link to full report.

The U.S. Secret Service’s National Threat Assessment Center (NTAC) is an integral resource for the agency’s no-fail mission to safeguard this nation’s highest elected officials. NTAC’s continuous efforts to ensure the informed development of prevention strategies through research has also enabled outreach programs and publications that assist our protective and public safety partners in their missions to prevent targeted violence in communities across the United States.

This report is the agency’s third in a series of annual reports that have examined mass attacks in the United States, during which three or more individuals were harmed. Since this project began in 2017, there have been 89 mass attacks involving 92 attackers that occurred in various locations throughout the nation. Understanding the key factors in preventing these attacks is even more critical this year with the COVID-19 pandemic causing additional stressors in the lives of our citizens.

To inform prevention efforts, NTAC researchers studied the tactics, backgrounds, and pre-attack behaviors of the perpetrators to identify and affirm recommended best practices in threat assessment and prevention. Implications include the identification of potential threats and individuals exhibiting concerning behavior. Strategic development of interventions and risk mitigation efforts tailored to those specific individuals are also a core aspect of this study. We encourage our public safety partners to review the information and apply it to their own best practices for providing a safe environment for communities across the country.

Law enforcement officers, mental health professionals, workplace managers, school personnel, faith-based leaders, and many others all play a significant role in the multidisciplinary team approach that is the foundation of the field of threat assessment. The Secret Service is committed to facilitating information-sharing across all platforms of targeted violence prevention and public safety. Our longstanding collaborative partnerships with these valuable members of the community serve to enhance public safety, and strengthen our mandate to keep our nation’s leaders safe.

The MAPS report from the US Secret Service is the most accurate national report that covers events that we collectively think of when we hear ‘Mass Shooting’ or ‘Terrorism’ here in the United States. When looking for an accurate representation of the more indiscriminate attacks that lack the more common motivations of purely relational homicides, fights that escalated, or violence tied to for profit criminal activities directly and took place in public or semi-public forums.

These are the attacks that are most shocking, most jarring to our sensibilities because the motivations are the least understandable to us. The attackers themselves tend to embody the most inhuman traits humanity is capable of producing at the time of their violent lethal outbursts.

The MAPS report is also a stark indication of just why we cannot have a “reasonable discussion” over gun control. Gun control proponents do not argue for policy based upon these analysis and reports, at least not in their totality. They constantly reference just enough data to support whichever pet policy they are a fan of and will win them kudos and brownie points in the political sphere, regardless of the policy’s actual reasonable efficacy or its harmful impacts to the law abiding.

It is literally impossible to come to a “reasonable compromise” with someone or some group that is sitting down across the table from you with horrendously obfuscated data (under the best of circumstances) and who is unwilling to entertain physical security measures instead of harping solely on what amounts to a complete eventual prohibition on firearms. A policy that would only legally prohibit them, not in any way effectively remove them from the multitude of human violence equations.

Homicides, mass or otherwise, occur when the murderer feels they are necessary in some manner, not because there happens to be a tool at hand to commit them.. there is always a tool at hand if you have hands. Our most effective combined efforts for combating unjustifiable (and, by extension, justifiable) homicides has been reducing the instances in which homicide feels necessary. This is a complex social equation that seeks to collectively lower the stresses and offenses of the population and not a single thing about doing so is ever simple.

So now that we have the philosophical commented upon, let’s take a look at the MAPS weapon data.

Researchers identified 34 incidents in which three or more persons, not including the perpetrator, were harmed during a targeted attack in a public or semi-public space in the United States between January and December 2019. Three of these attacks were perpetrated by pairs of attackers. In this section, percentages are calculated based on the 34 attacks.

Most of the attacks (n = 24, 71%) involved the use of one or more firearms, which included rifles, handguns, and a shotgun. Other weapons used included bladed weapons (n = 6, 18%), vehicles (n = 4, 12%), and blunt objects (n = 3, 9%). Three attacks involved a combination of weapons, including a firearm and a knife, a firearm and a vehicle, and a knife and glass bottles. Several incidents involved the attackers bringing weapons to the site (e.g., additional firearms, pipe bombs) that were not ultimately used.

Percentages shown are out of 24 incidents involving firearms

In at least ten (42%) of the attacks involving firearms, one or more of the attackers possessed the firearm illegally at the time of the incident. In two incidents, an attacker was a minor in possession of a handgun, which is prohibited under federal law. In the remaining incidents, the attackers had prior felony convictions, had stolen the firearm, had not obtained a valid weapons license, had a previous involuntary commitment to a mental health facility, or had another factor present that prohibited them from purchasing or possessing a firearm based on federal and/or state laws.

That is a telling paragraph, in my opinion. In nearly half the incidents gun laws already prohibiting the perpetrator from possessing their weapon were already in place and flagrantly violated… and in more than half the incidents the firearms was legally possessed so gun laws again failed to prevent the attack and had no hope of doing so. In 100% of these cases the intervention of written law, of prohibition specifically, failed utterly. That leaves social interventions, that of friends and family and the community, as the only effective means of mitigation.

Motives for violence are often multifaceted. The most common motives identified for mass attacks in 2019 were related to grievances, mental health symptoms, and ideological/racial bias.

Of all the motives for the attacks given, despite what national and international media would have you think, a bias resulting in violence was less prevalent than common grievances were.

Biases still accounted for 21% of the attacks however, meaning it is a motivation to take seriously. But it is also not one demographic above others, all biases at the extreme edge are dangerous.

Seven incidents (21%) involved attackers who were motivated to violence by extreme or hateful views. Attackers targeted members of various groups including Jewish, Muslim, Asian, or Hispanic people, as well as police and U.S. soldiers. For three of these incidents, the attackers were also experiencing mental health symptoms that influenced their motives. [Emphasis added]

Seven incidents, six separate demographic targets. This isn’t #WhiteSupremacy or #AsianHate or run-of-the-mill anti-Semitism or anti-Islam. It is the whole umbrella of biases. They are all roughly comparatively dangerous, meaning extremely dangerous at the ragged edge of biases. It does not matter who the bias is against, its the extreme level of the bias the motivates the violence and modern media coverage is not structured to reduce the biases. It can and does actively inflame them.

Why? Angry people click things. The share, they rant, they comment. They do all the things that drive revenue that content people do less of since they’re basically just chilling out living their best lives.

Nine of the attackers were influenced by, or showed interest in, past perpetrators of mass violence. Some attackers documented their admiration of past attackers in their own manifestos or in social media postings, while others spent time consuming information about past attacks. Five of these attackers referenced other attackers from earlier in 2019 prior to committing their own acts of violence. While three of them referenced other incidents contained in this report, the remaining two named a mass attacker who targeted public places outside of the United States. One additional attacker researched a female who was so obsessed with the 1999 Columbine High School shooting that she traveled from Florida to the Columbine High School area in April 2019. She purchased a weapon, but committed suicide prior to initiating an attack.

That is a sick and seductive level of power to the right mind. That seduction is strongest close to the events themselves. And no, “not saying their names” is a not an effective strategy. It’s more failure prone than the TSA. The events themselves will be covered, always, in great detail. In the places online where such minds visit, read, and absorb they are talked of with even greater fervor in many cases.

The main point I want to stress is that these attacks are complex events. They don’t just stem from white supremacy or gun access or racial inequity or any other single soundbite style motivational hashtag. They stem from all of them, and policies designed to overly aggressively target one of them have a adverse effect on others. Again, one of the leading motivations was purely grievance, not race. So if we hit racial motives hard and inflame grievance instead, what did we accomplish?

We need to stop oversimplifying this topic. It actively harms making progress toward reducing violence.