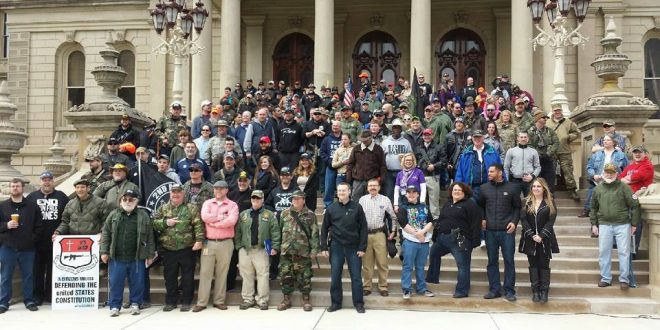 We frequently receive requests for a status update on the “Constitutional Carry Bill”. Well here’s the thing, there are actually 13 bills, they are spread out over three different competing packages, and each package does something different. That’s a lot to keep straight, let alone explain, so we wrote this guide to help everyone out.

“Constitutional Carry”, or “Con Carry” for short, is a very hot topic in the gun community both nationally and in Michigan. It can mean different things to different people, but at its heart it involves allowing people to carry a pistol, open or concealed, without a license.

As of May 2017, 13 states already have some form of it and the question everyone keeps asking is “Who’s next?”.

We’re only a few months into the 2016-2017 Michigan legislative session, and already three different bill packages have been introduced to enact Con Carry in Michigan. Each package is unique and approaches the topic in its own way. This article will break down the pros and cons of each one from our perspective to help you understand what’s going on and keep it all straight.

While all of the bills listed have only been introduced as of the writting of this article, we do expect at least one of the packages to come up and hopefully make it out of committee. Michigan Open Carry‘s Legislative Team will closely follow all three packages and will publish updates via our email list. If you would like more information, please sign up for that list and/or contact the team at Lobbying@miopencarry.org

Rep. Lucido expressed to us that he would very much like to pass Constitutional Carry (permitless concealed carry) legislation in this state. However, like us, he understands that there are certain hurdles, Governor Snyder chief among them, that will be difficult to get over. Rep. Lucido’s strategy was to ask the law enforcement community what they would like to see to not oppose the legislation, and the disclosure and detainment provisions were supposedly their response.  While the compromises in this package may be unpalatable to some, they do increase the odds of success for this package and therefore warrant legitimate consideration.

– Anyone who is not otherwise prohibited from possessing a firearm under state or federal law would no longer need a CPL to carry a concealed pistol, or a pistol in a vehicle.

– No restricted zones are addressed.

The goal of this package is singular and focused, which has lead it to be the cleanest and most straightforward of the group. The goal is simply to remove the requirement that otherwise responsible and law-abiding people get a government permission slip in order to exercise a Constitutional right for their own self-protection. Nothing more, nothing less.

While the package does not address any of the restricted zones that are high on every CPL holder’s list of things to fix, this is likely a strategically wise move. The more a piece of legislation attempts to accomplish, the more opportunity for opposition it creates. By narrowly tailoring their goal, the sponsors are able to shine a spotlight on the disparity between open and concealed carry by referring to a CPL as a “coat tax”. Essentially, if one can already open carry without a CPL, then the only thing a CPL really does for the person, outside of a restricted zone, is it allows them to put a coat on, something that is very relevant in a northern state like Michigan. This focused argument is very compelling while being relatively immune to the usual “guns everywhere for everyone” hyperbole such legislation typically faces.

– Repeals the prohibition on carrying a concealed pistol, or a pistol in a vehicle, without a license.
– Repeals the prohibition on carrying “scary knives” concealed.
– Drastically reduces restricted zones (for both firearm possession and concealed pistols), except for schools and bars.
– Repeals related prohibitions on firearm possession in the Natural Resources and Environmental Protection Act.
– Cleans up various useless sections in the penal code.
– Bipartisan sponsors and cosponsors.

– Far reaching legislation can be difficult to get off the ground, let alone over the finish line.

Where the other packages take a tempered approach to the subject, this one does the opposite. Rep. Glenn has stated that this package will make others look mild in comparison, and there is no disputing it accomplishes just that. HB 4565-4568 is an omnibus package that checks off a significant portion of the average Michigan gun owner’s wish list. From licensing, to restricted zones, this legislation holds true to the notion of “Constitutional Carry” more than any of the others.

At the same time, while gun owners are sure to applaud this bold proposal, actually seeing the legislation through to completion will be a very heavy lift at every step of the process. It’s clear that these sponsors are dedicated to supporting the Second Amendment, but unfortunately that doesn’t always hold true when it comes to the rest of the Michigan Legislature, let alone the Governor.

This article was first published at www.miopencarry.org