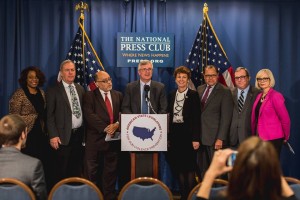 The American State Legislators for Gun Violence Prevention introduced itself Monday with the goal of supporting increased background checks and reducing dangerous individuals from accessing to guns.

Claiming some 200 members spread across all 50 states as well as Puerto Rico, and the District of Columbia, the new organization plans to devise strategies that fight gun violence by improving the background check system for gun buyers.

“Many of our members are also interested in promoting more robust and effective intervention programs in communities that experience high levels of gun violence,” the group said on its website.

While the group presents itself as non-partisan and has not disclosed its membership list, eight of the nine lawmakers quoted in the organization’s debut press release are Democrats. The sole Republican is state Rep.Barbara Bollier from Kansas.

In October, that Kansas lawmaker advised she voted against her state’s recent preemption law and promised to change state gun laws by supporting mandatory background checks for any gun purchase as well as limiting types of guns and magazine capacities.

Following Monday’s press conference Bollier, a medical doctor, announced that she will be introducing a bill expanding background checks for gun sales in the Kansas House because she views gun violence as a public health issue.

The group’s founder and head, New York Assemblyman Brian Kavanagh is a prolific bill generator when it comes to gun control issues. Currently he has no less than a dozen pieces of legislation in various stages of the political process that propose everything from mandatory 10-day waiting periods before being able to accept a firearm, to banning .50-caliber rifles and ammo that would include mandated confiscation, and even a proposed ration system limiting gun owners to one purchase every 30 days.

In October, Kavanagh introduced to the Assembly a bill to provide for gun violence protective orders authorizing confiscatory gun seizures from those deemed a risk to public safety.

Both groups have since come out swinging in support of expanded background checks, mental health reporting of prohibited possessors, and other measures.