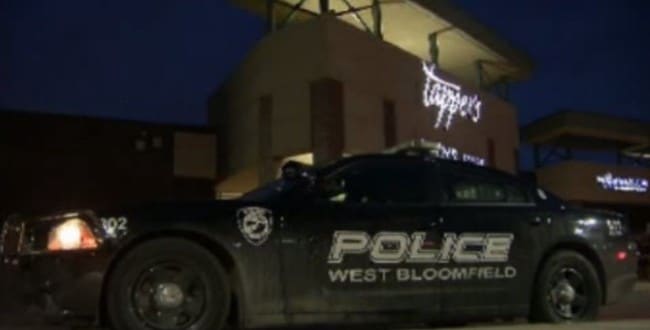 Wednesday 2 local Michigan business had been host toarmed robbers. As of this writing police suspect that the 2 burglaries were actually performed by the same group of men.

In Grand Rapids at Medawar Fine Jewelry 4 assailants entered the store and attempted to rob the business. The owner Paul Medawar having been robbed 4 years earlier was not willing to be a victim again. Paul and his son David who were properly armed and had taken training classes opened fire on them and hitting at least one of the assailants. What is described by police as a significant amount of blood was left at the scene.

The robbers fled the scene without being able to steal anything from the store and none of the employees or customers were harmed. Textbook case of a responsible gun owner protecting his family, customers and property in the face of thugs.

Police locked down a local school put extra officers on the highway and brought in canines to attempt to track these either 4 or 5 guys depending on conflicting reports. They still appear to have gotten away even with this additional presence.

Roughly 4.5 hours later in the day at 5pm 3 of the suspects entered a West Bloomfield Tappers and again attempted a robbery. This time they succeeded because  Tappers in West Bloomfield is a gun free zone. None of the staff appears to have been armed and the customers would not be allowed to carry in the store due to the no gun sign on the front door.

When the robbers entered the store this time they were not stopped and instead terrorised 12 employees and 7 customers ordering them to the ground and stealing thousands of dollars worth of  Rolex watches. Luckily nobody was hurt at the scene of either crime. Well no responsible law abiding citizens were hurt the robber took one to the torso and his state and whereabouts are currently unknown.

At the end of it all, because of the blood left by the gun shot wound at the attempted robbery in Grand Rapids, police have leads to track these individuals down.  Not only did Paul and David Medwar protect customers, themselves and their property their willingness to stand up to violent armed criminals have now given the police a dna sample and a lead for finding these violent thugs.

I live near Tappers in fact I go the chinese restaurant right next to it but refuse to shop in any store with a no gun policy. Had police gotten to the scene earlier it could have turned into a hostage situation. Instead of being in a position to defend my family and life, I would have been at the mercy of criminals so brazen they drove hundred of miles in a single day to attempt a second robber after having one of the group already be shot.

How can you possibly think that gun laws will stop people like this, criminals who will never obey the laws and are dead set on robbery and violence. It is my hope that after seeing the events at these 2 locations more stores will tear off those gun free stickers and instead allow law abiding citizens like Pauls and David Medawar the ability to defend themselves from violent offenders who’s criminal activity knows no bounds.