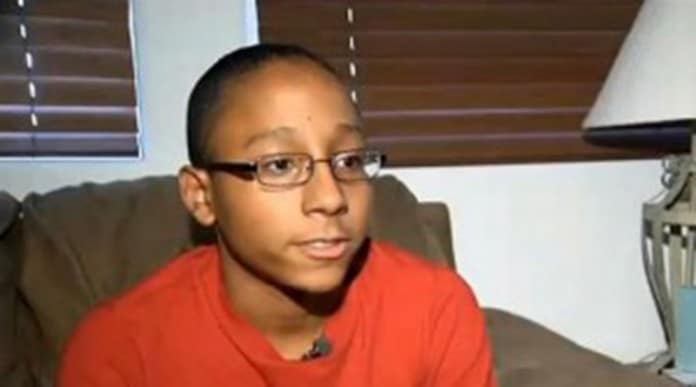 A 14-year-old boy is being called a hero after he protected himself, his 6-year-old siblings and their home during a broad daylight break-in at their North Las Vegas home last week.

Andrew Mason, his brother and sister were all home alone, with Andrew in charge, when the two suspects began knocking at the front door. Just as his parents had previously instructed him, Andrew didn’t answer the door, but the knocking intensified and eventually Andrew realized it was more than just a mere knock.

One of the suspects slammed against the door repeatedly until he broke the frame around the door’s window. He then slipped his hand through the broken window and unlocked the door before both suspects simply walked inside.

Meanwhile, Andrew told his younger siblings to go hide in an upstairs closet, while he grabbed a cell phone and a .22-caliber rifle and called 911 before hiding in the closet with them.

“It’s pretty intense, once I heard that thud on the door, my heart was just racing,” Andrew told a local Fox affiliate in an interview after the incident.

Andrew said his parents previously discussed – and practiced – a scenario such as this with him and he was prepared. The teen said the rifle was loaded and he was ready to shoot if need be, but it never came to that.

After the backpack-toting burglars rummaged through the home and took a few things, they made their way to the closet where Andrew and his siblings were hiding. But once they opened the closet door and found themselves at the receiving end of the boy’s rifle, they quickly decided it was likely in their best interest to exit the home.

No shots were fired and no one was injured, but still, Kiewa Mason said he received the phone call no parent ever wants to get.

“I said, ‘Is everything OK?’” Mason recollected when Andrew called him. “And he said, ‘No, someone has broken into our house.’”

Nonetheless, Mason said his son did everything perfectly and called him a hero. He said they are a family who believes in the right to bear arms and – along with the kids – visits the range frequently.

“It truly angers you,” Mason added, speaking of the home invasion with a local NBC affiliate. “My wife and I work very hard. We don’t bother anyone, and for someone to come violate our family our household, it really is upsetting.”

Fortunately, Mason recently had a surveillance system installed, which captured images of the suspects, who appear to be teens as well, along with their getaway vehicle. Authorities are hopeful they can use the images to identify the suspects.

And when reporters asked Mason if there was another firearm in the house with a caliber larger than a .22, he replied, “Oh, absolutely,” with a laugh.